Rehab leads to better overall outcomes than surgery for athletes 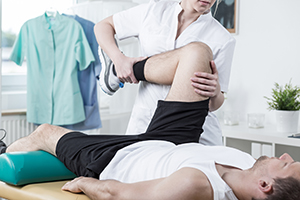 Athletic groin pain (AGP) is general term used to describe any chronic (long-lasting) injury to the groin area, which is at the junction of the torso and leg, in physically active individuals. AGP has become more prevalent in recent years, and it's especially common in athletes who play soccer, Australian rules football, and ice hockey. AGP can be treated either with a variety of surgical procedures or with rehabilitation, which usually includes physical therapy and exercise training. To date, the effectiveness of these two treatments for AGP has not been compared, so a powerful study pairing called a systematic review and meta-analysis was conducted.

Return to play rates and times of two treatments are compared

Four major medical databases were searched for studies on athletes who had either surgery or rehabilitation for AGP that were returning to sports, and each study had to contain information on their return to play rates-how many players actually return-and return to play times. This search identified 561 articles to be assessed, and 57 fit the criteria and were used for the review. These studies contained data on 3,332 patients, who were 99% male, and their primary outcome measures were return to play rates and time after the interventions.

Results showed that recovery times in the rehabilitation group were half of those in the surgical group, at a statistically significantly 12.6 weeks faster. In addition, little difference was found in return-to-play rates between surgery and rehabilitation, which suggests that both led to approximately the same number of athletes returning to sport. A close similarity was also found in return-to-play rates when surgery was compared with physical therapy. Unfortunately, the quality of the evidence used in this study was not very high; however, the findings still make a solid case that rehabilitation is a more effective treatment for AGP. Considering the fact that surgery is more expensive and can lead to additional complications, it appears that rehabilitation should be the treatment-of-choice in most cases of AGP that will lead to the best outcomes while more research is conducted on this topic.