Aquatic exercise leads to improvements for men with type 2 diabetes 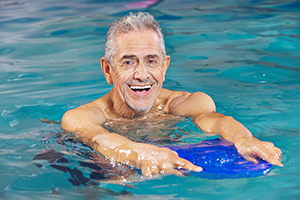 Water is a safe and protective environment for overweight individuals

Type 2 diabetes is a common disorder in which the pancreas doesn't make enough insulin or the body can't use insulin well enough, which can lead to many physical problems. It's associated with being overweight or obese and not getting enough physical activity, and its prevalence is increasing in the U.S. Exercise is therefore believed to be the treatment of choice, and it can lead to many benefits. Aquatic exercise, which is performed underwater, is also associated with benefits, and is especially effective for overweight individuals. Water is a safe and protective environment for their joints, which means the risk for injury is lower than on land. Therefore, aquatic exercise may be ideal for type 2 diabetics, and to investigate this matter, a study was conducted using an aquatic exercise program for men with type 2 diabetes.

Eighteen men with type 2 diabetes for fewer than 10 years were selected. Each participant went through an aquatic-based exercise program, which was carried out over three 50-minute sessions per week for 12 weeks. Each session focused on swimming techniques and muscle strengthening. All participants were given heart rate monitors during these sessions and were evaluated before and after the program, as well as each session, for variables like blood glucose levels, cardiovascular health, quality of life, and physical activity levels.

Aquatic exercise leads to similar benefits as those found on land

Results showed that patients experienced numerous physical and emotional improvements after the aquatic exercise program. Of these improvements, patients reported a significant decrease in blood glucose values, an increase in their ability to breathe, and reductions in blood pressure. They also experienced a better quality of life, had more energy, and got more physical activity. Overall, these benefits were found to be similar to those reported from land-based exercise carried out in the gym or elsewhere, and no negative effects were found from aquatic exercise. Based on this, an aquatic exercise program seems to be safe and effective for men with type 2 diabetes that can lead to many improvements, and it should be strongly considered for these patients, especially if their condition makes it difficult to exercise on land.