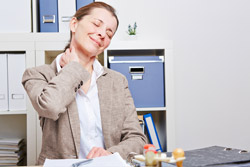 For people who work in an office setting, much of the time in any given day is spent sitting in a chair. All this time sitting is believed to possibly strain the neck, and office workers report a particularly high rate of neck pain: about 42-69% experience pain every year, according to one study. Neck pain is often a recurring problem and can even lead to an employee missing work in extreme cases. Therefore, it is a major concern in the workplace that must be addressed. One possible way to deal with this issue is to offer a prevention program to office workers that consists of stretching exercises and endurance training, which have been shown to be effective for neck pain. To test out this approach, a study was conducted to evaluate the effect of a 12-month exercise program on the neck pain of office workers.

A total of 567 office workers between the ages of 18-55 who had lower-than normal neck flexion movement (bending of the neck to the side) or neck muscle endurance were used in the study. These subjects were then divided into two groups: one followed the exercise program intervention, the other was the control group (no intervention). The exercise program consisted of muscle stretching, which was designed to stretch the short neck muscles, and endurance training, which was designed to increase the endurance of the long neck muscles. Participants in the intervention group were instructed to perform the stretching exercises twice a day and endurance training twice a week. All subjects were asked to keep their level of physical activity unchanged and avoid regular exercise.

At the 12-month follow-up of the study, 12.1% of subjects in the intervention group and 26.7% of those in the control group reported an incident of neck pain. Neither group experienced any harm or unintended effects from the protocol. Further analysis showed that this type of exercise program could reduce the annual incidence of neck pain by 55%. These results are therefore supportive of the use of a neck stretching and endurance training program to reduce the likelihood of neck pain in office workers. Since a program like this can easily be taught to office workers in a short period of time, it should considered an attractive option for any executive looking for a simple and cost-effective way to keep the necks of their employees pain-free.